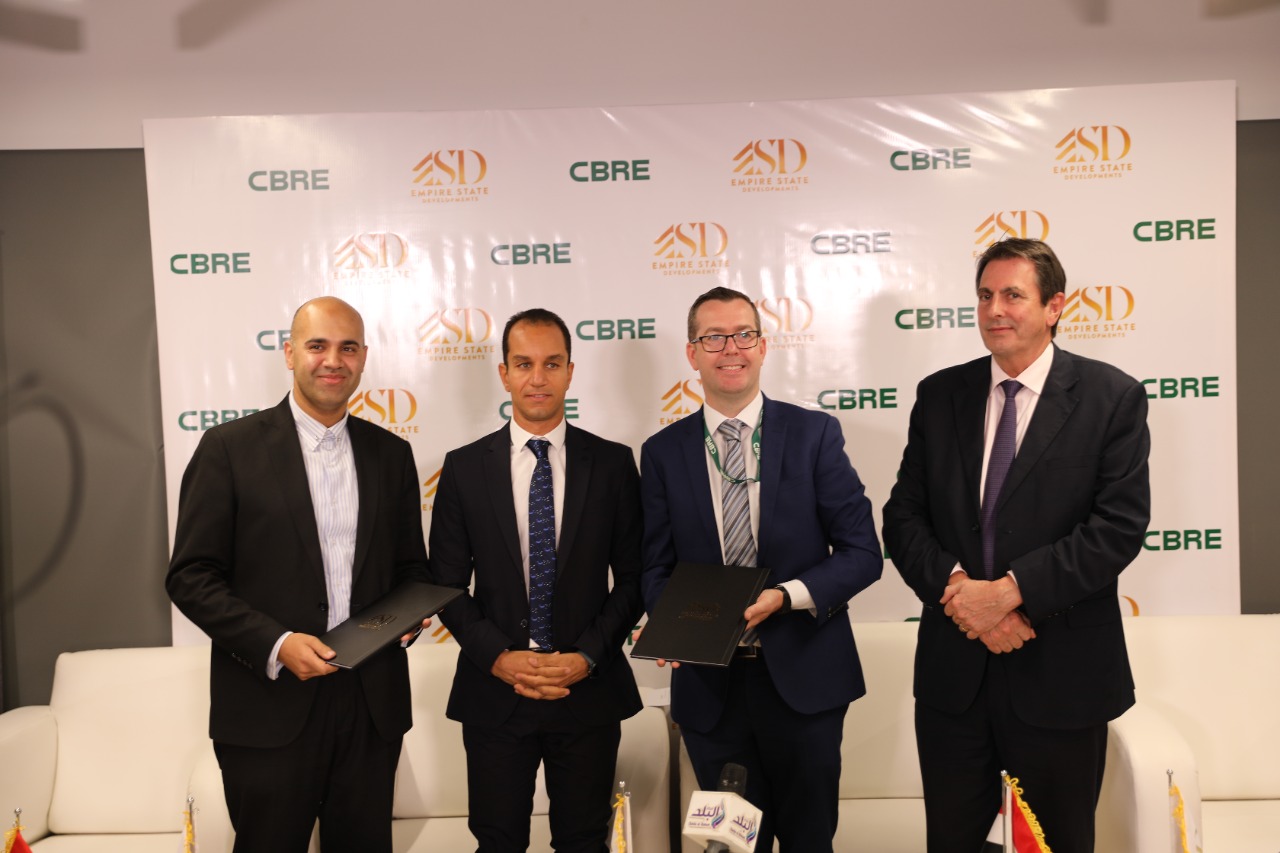 Empire State Developments has contracted with the global company CBRE to provide consultancy for property & management in El Centro project in the New Administrative Capital.
The contract was signed by Chairman and CEO of Empire State Developments Mahmoud Elsarrag and Director of Property Management at CBRE Ciaran Lynch, in a signing ceremony that included a number of officials from both companies, besides, media and journalists.
Chairman and CEO of Empire State Developments Mahmoud Elsarrag said that partnering with the international company CBRE is a strong addition to El Centro project, and comes within the company’s strategy to choose success partners to develop its project.
Elsarrag pointed out that CBRE is the top property management consulting firm globally management according to the Fortune 500.
He explained that the CBRE will be responsible for providing consultancy services for property management and facility management to El Centro Business complex Over and beyond, CBRE company was chosen for being the first in the world in this field.
He further noted that Empire State is looking for a partner with global experience in the field of real estate facility management to take advantage of previous experiences and the weight of its brand.
He pointed out that the El Centro is 15-storey mall and is located on 24,000 sqm, with total investments worth 750m EGP. The mall comprises three floors for commercial units, in addition to, medical and administrative units besides hotel units managed by Safir International Hotel Management Company.
The project also includes a multi-level garage with smart parking system, he said, noted that the project has a panoramic view on the central park in the middle of the New Capital.
“Empire State began construction on the project at the beginning of October and the entire project is planned to be delivered in the last quarter of 2024 with targeted sales amount to EGP 1.2bn. ACE Moharram-Bakhoum will assume role of engineering consultant for the project, meanwhile, Empire Construction, Al Hamad Contracting Company and and Nile Contracting company will build the project,” he elaborated. “Price per square meter in administrative units of the project starts from EGP 23,000 with space starts from 30 sqm, moreover, the company offers payment plan up to 20 years.”
He pointed out that the company relies, in its competition in the New Capital, on providing an innovative and unique real estate product, choosing a prime location for its project, flexible payment plans that suit many customers. In addition, providing all services and facilities in the project, choosing a distinctive management to ensure the project quality, and contracting with prominent specialists in all disciplines within the project, as well as presenting a project with a unique and modern design inspired by Spanish style.
Empire State intends to record EGP 600m in sales by the end of the current year he revealed, added, “The company succeeded in achieving sales of EGP 250m since the beginning of the year until the end of September. Moreover, we plan to direct EGP 150m into El Centro constructions in the last quarter of this year.”
Furthermore, he stated that the total investments of the company amounted to approximately EGP 2 , Bills mainly with self-financing, with the use of bank financing in contracting business, which is one of the company’s businesses.
As for the company’s expansion plan, Elsarrag disclosed that Empire State plans to expand its investments in the New Capital’s Downtown area, noted that studies related to property market are being completed in preparation for launching new projects soon.
The company is still studying investing in a residential project, specifically in R8 area at the New Administrative Capital, according to the chairman.
He stressed that Egypt’s real estate market is witnessing strong competition due to increase in volume of diversity, and this competition pushes each developer to be innovative and flexible in all phases of the project, starting from choosing project location, and in cooperating with distinguished entities to develop a unique project.
Director of Property Management at CBRE Ciaran Lynch stated, “Cooperation with Empire State Developments is the company’s second contract in Egypt, as the company chooses projects with great care and in accordance with specific standards of the company. The first contract was made with the Chinese company CSCEC, which is responsible for constructing the iconic tower and the central business district in the New Administrative Capital.
He pointed out that the global CBRE group was established in 1906 in San Francisco. In 2011, CBRE assumed a leadership position in another essential commercial sector by acquiring the largest share in real estate investment management business. Besides, the company continued its constant progress of achievements until 2021 by acquiring a subsidiary stake of interest in Industries Corporation, which provides flexible solutions for workplaces.