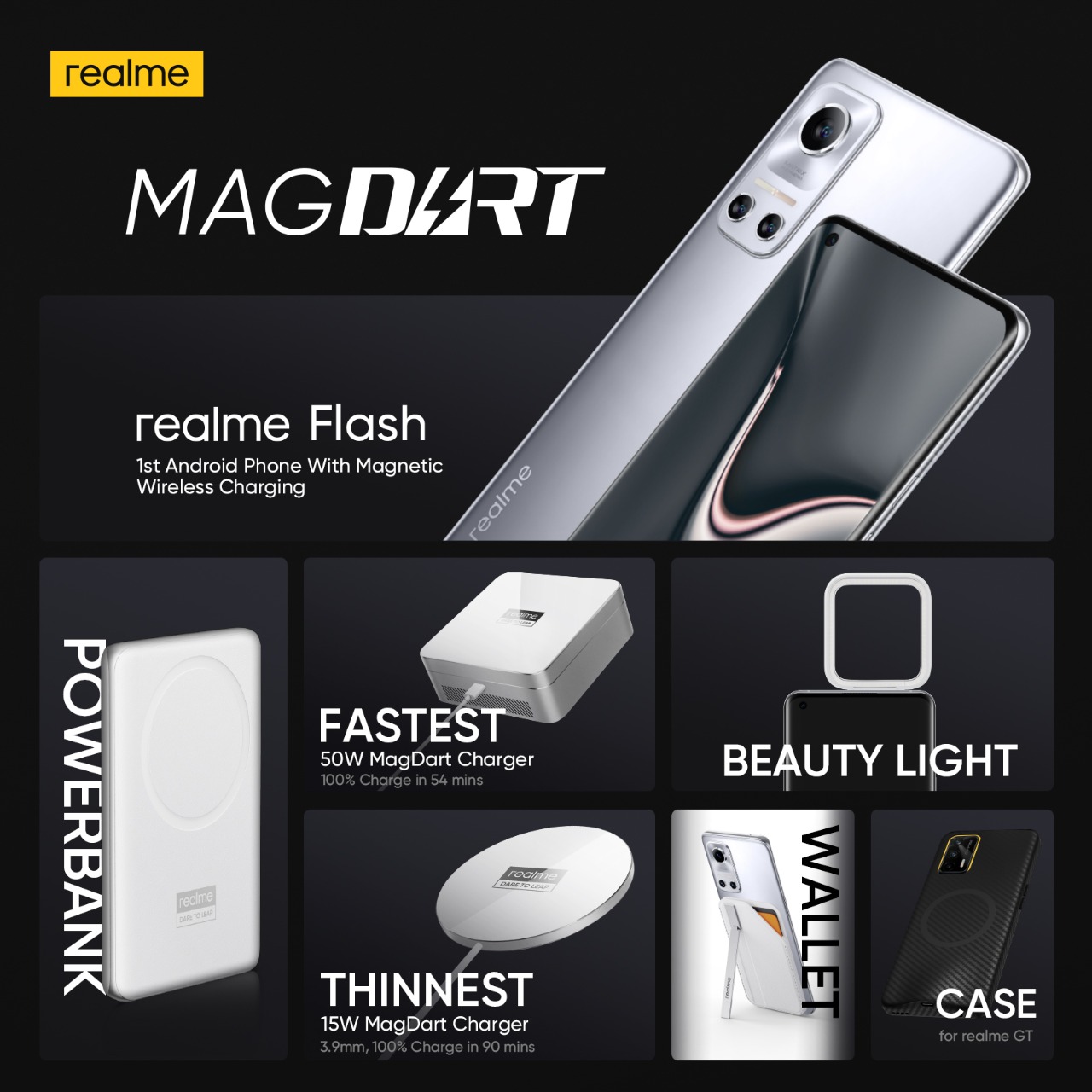 realme Flash, the first Android smartphone that supports magnetic wireless charging
The realme first concept phone, realme Flash, features a 4500mAh battery capacity and can support up to 50W of MagDart wireless charging, which can charge the battery from 0 to 100% in less than an hour, nearly the same as realme 50W SuperDart wired charger.

50W MagDart Charger, world’s fastest magnetic wireless charger
The 50W MagDart charger features an active air-cooling system that keeps the mainboard and coil temperatures at a reasonable level with a compact and powerful fan that can quickly remove heat by drawing a large airflow into the charger so that it can maintain the charging power at high levels for a longer time.

15W MagDart Charger, the thinnest magnetic wireless charger
The 15W MagDart Charger is only 3.9mm, 26.4% thinner than the MagSafe Charger, but it is still faster than MagSafe due to its Separated Coil & Board design. It sets the mainboard and the coil at the two ends of the charging plug and the charging pad respectively, thus making the charging pad thin with only one charging coil. And it separates these two sources of heat generation, thus reducing the heat generation situation and providing longer high power charging hours, which can charge the 4500mAh battery from 0 to 100% in 90 mins, much faster than the rival product.
2-in-1 MagDart Power Bank
There are also the MagDart Power Bank and a special charging base. The two can be paired together to become a vertical charging station. The phone can get charged from the power bank, and the base can charge the battery bank at the same time. If you need to charge on the go, the power bank can be pulled up and attached to the smartphone. For the design, the power bank uses white vegan leather and aluminum.

MagDart ecosystem accessories
MagDart Beauty Light is designed for portrait photography. It can be easily connected to the phone via MagDart and powered via smartphone reverse charging to provide an extra flashlight when taking selfies.
The MagDart wallet can be turned into a kickstand to hold the phone up when watching movies or making video calls. It’s able to hold three standard credit cards.
realme GT MagDart Charging Case enable realme GT compatibility with MagDart. This case connects through the Type-C connector and allows the phone to be charged wirelessly via the MagDart technology.

realme has always been bringing leap-forward technology to global young users. realme was one of the first to introduce the 125W UltraDart charging technology, and among the first equipped with the Qualcomm Snapdragon 888 processor. Its phones were one of the first in the world with a 64-megapixel camera. realme is keep providing young consumers around the world with products that have premium performance and trend-setting designs at affordable prices which makes realme became the fastest global smartphone brand to reach 100 million users’ milestone in three years, according to Strategy Analytics, a market research consultancy. realme is also the fastest growing major smartphone brand globally in Q2 2021 with a year-over-year growth rate of 149%, as data from research firm International Data Corporation (IDC) showed.
This achievement has further validated realme’s sales and business strategies across the globe. Established only in 2018, realme is now the 7th largest smartphone brand with presence in 61 different markets worldwide and ranks at Top 5 smartphone makers in 13 markets, claiming the first place in Philippines and Bangladesh, fourth in India and Russia and fifth in the Europe region in Q2 2021. This 100-million milestone is the latest in line of realme’s spectacular global rise, as the company adds another ‘first’ to its name.

About realme
realme is the fastest growing global smartphone technology company. The brand was officially established in May 2018 by Sky Li, who, in addition to his vast expertise, was able to create a trendsetting brand, offering state-of-the-art technologies and the boldest designs in the smartphone industry.
The realme brand philosophy revolves around redefining the young generation’s trends, opinions and visions, while revealing the endless capabilities its smart devices have to offer. The company is known for its famous motto “Dare-to-Leap”, which defines realme products and creates a daring life experience for generation Z.
realme was able to achieve exceptional growth and become the world’s fastest growing brand and “the brand of choice” among youth, enabling the globally acclaimed brand to demonstrate the power of youth to the whole world.
realme has a strong presence in more than 61 markets, including China, India, Indonesia, Thailand, Malaysia, Pakistan, Egypt, and Europe. The company has 100 million users worldwide, making it the fastest growing brand globally. For more information, please visit: https://www.realme.com/eg