Hometown Developments announced the launch of its fourth project in the New Administrative Capital (NAC), named “Udora”, in a ceremony organized by the company at JW Marriot Hotel, in the presence of real estate marketing companies and success partners.
Hometown’s Chairman Diaa Farag said that Udora Mall is a commercial administrative building situated on 3.4 acres in one of the most distinguished locations in the NAC’s Downtown area and overlooking central axis at the New Capital and located directly in front of Al Masa Hotel.

Farag added that the company has contracted with DMA for Design and Engineering Consultancy for “Udora” Mall, noted that the project comprises six commercial floors with units’ spaces start from 30 sqm in addition to basement floors dedicated to parking.
He explained that the company offers units for sale at competitive prices with various payment systems with down-payment starting from 10%. Moreover, the company offers exclusive payment plans, which are offered for the first time in the New Capital.
The project design allows more than 95% of units to have a view on Al Masa Hotel or tourist walkway in Downtown area, which increases investment value of the project, he elaborated. 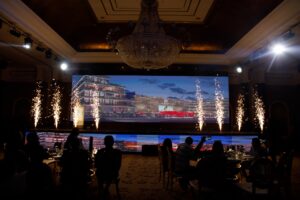 “Hometown began receiving customers’ reservation forms last Sunday for a period of 15 days only, due to the uniqueness of offered units and their limited number. The date of delivery will be announced next July,” Farag explained.” Additionally, the company owns three various projects in the New Capital namely “Zaha Park”, “Lafayette Mall” and “Village Mall.” 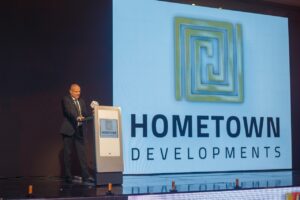 “Zaha Park” project is located on 7,200 sqm in the NAC’s MU23, with a total investment exceeding EGP 1bn. Furthermore, the project is being developed over two phases and consists of 10 floors. As for the “Village Mall” project, it is placed on a built-up area of approximately 22,000 sqm, and it is a commercial building dedicated to restaurants and cafes in the Downtown area. Meanwhile, Lafayette project is a commercial and entertainment resort in the Downtown area spans over 43,000 sqm. It is situated directly in front of Al Masa Hotel.